It's interesting that the US-EU Privacy Shield has now been completely invalidated (which isn't a complete surprise). 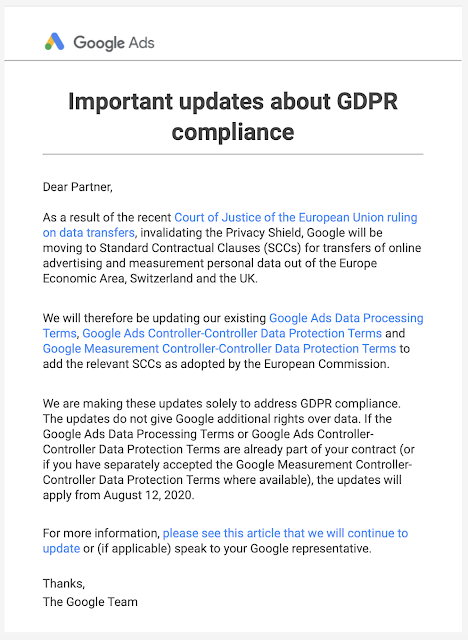 The link in the email takes you to this PDF, which summarises the courts' decision.
Given that the UK is now separate (but still the same) regarding European Law it will be interesting to see how this decision is incorporated into UK law.
My money is on a US-UK trade agreement re-writing GDPR to become "what the US says and does is fine".
Posted by Andy Pellew at 12:16 PM 2 comments:

I've been a user of Google Photos since it was introduced as a service. Managing the shear bulk of photos I have in the service has always been a huge challenge. A few years ago I shifted to using other services to manage my photos simply because the amount of junk that hung around in Google Photos would just take too long to tidy up.
I had already emptied all the photo albums - and now have more than 1,000 empty photo albums and no way to remove them. Except individually. By clicking on each one, selecting "Delete" and then Oking the popup that appeared.
This would take days - hence why after spending a lot of time on it I gave up and began looking at other services.
And finally, yesterday, after a gap of a few years, I picked this up again and took another look to see if there was anything out there that would help. There wasn't. Despite a lot of people requesting the feature on Google's Support pages (since 2016!) there was no solution.
Well, that's not true, I stumbled on a comment which mentioned a MacOS application called "Keyboard Maestro". 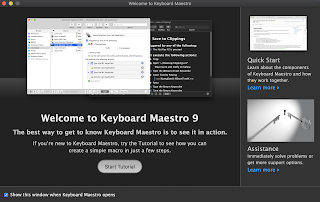 The version I downloaded was Version 9 and is available on the companies website;
https://www.keyboardmaestro.com/main/
There's a "free trial" if you fancy it, but after using it for Google Photos I can wholeheartedly recommend it if you are looking for something to automate your tasks. This application literally saved me days ...
Probably the easiest way to do this is to share the file I've created; Google Photos Delete macro.
So here's how it works (because you *will* need to change it, especially if Google Photos develops). 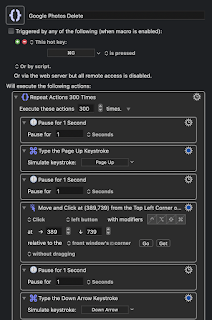 The top bit is the number of times to do the delete - I'd recommend setting this to 1 until you've got it working!
There are lots of pauses - this is just to give to make sure Google Chrome (the browser I used) has updated with the actions that have been taken. My assumption is that accuracy is more important than speed - frankly, I didn't care that it took 30 minutes, it saved me days of manual work!
The "Page Up" moves you to the top of the web page - the assumption is that you have a large-enough screen to see the empty albums from looking at the top of the google photos web page. This means the button that needs to be clicked to bring up the options for the Photo Album is in a fixed place - and clicking on it is the job of the "Move and Click"-part of the macro.
This is the last mouse-click, control then switches to the keyboard.
Down-arrow twice to get to the "Delete" option, and then pressing "Return" to select it then, following a wait for the dialogue box to appear, press Return again to activate the delete.
And finally, wait two seconds before repeating.
Hope this is useful!
Posted by Andy Pellew at 9:23 AM 2 comments: 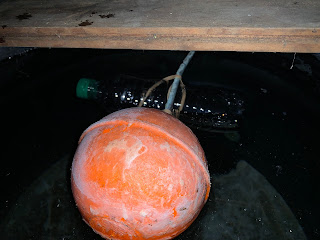 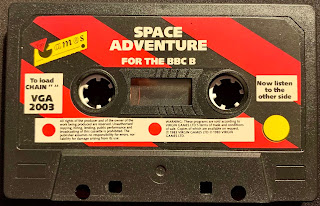 Posted by Andy Pellew at 9:29 AM No comments: