The end of Ultraviolet?

Ultraviolet was originally created as a way for the film industry to reduce it's reliance on Apple and iTunes - they basically saw what had happened to the music industry and decided that they didn't want to fall into the same "trap".

Ultraviolet always had a problem in that Apple didn't support it, and neither did Amazon or Google. That's the three biggest players in digital movies so it was always going to have trouble gaining traction in the marketplace. Unlike the HD-DVD (remember them??!!) vs Blu-Ray battle of a few years back movie studio's learnt the lesson that making titles "exclusive" to one particular format would alienate customers so they definitely took the view that the market should decide.

Should probably note here that I'm an Apple person. I'm not really. I'm a Google person. One of the first Gmail users. However, at the time only Apple was offering TV shows so I started buying with Apple and now have such a large library of TV Shows and Movies that I really can't go anywhere else. On and Android isn't as good as iOS, particularly once you have taken into account the level of Samsung crap-ware that comes embedded and impossible to remove!

So I received this from TalkTalk; 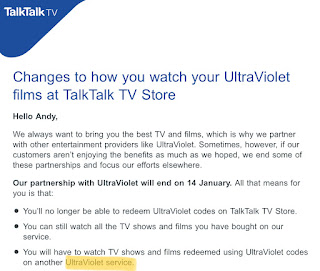 In the UK we have (or had) a choice of either TalkTalk or Flixster for redeeming Ultraviolet codes. TalkTalk's exit from the market will at least leave us with one - Flixster. The problem with that is that Flixster is busy exiting the Ultraviolet market in the US which is now busy consolidating around Disney's Movies Anywhere (renamed just to Movies Anywhere) - this "new" industry initiative includes not just Ultraviolet, but also Amazon, Google, and Apple. For the first time, you can literally get everything you've brought in one place.

But currently "Movies Anywhere" is US-only. There is no real clue about a UK launch date so we are left in limbo - the service is currently in its death throes but until an alternative launches, it's all we've got.