So this is driving me mad. I've spoken with Apple, and they've been quite clear that it's not up to them - it's the fault of the BBC who have added the metadata for the Classic Doctor Who series in a very isolated (and not particularly helpful) way.

So here's what it looks like for me when I go to Doctor Who: The Classic Series on iTunes;

As you can probably make out the episode order is a little messed up. For some series like Time and Rani, I can at least work out the sequence - if the episode title is "Time and the Rani, Episode 1" I can work out where they fall in the series. No so with episodes just titled "Episode 1".

I have 141 episodes largely from purchasing the "Best of the Xth Doctor" sets of episodes - for example; The Best of the Second Doctor, and The Best of the Fourth Doctor (both with identifiable episode titles). Whereas The Web of Fear, The Two Doctors, and Power of the Daleks (all of which have "Episode x"-style titles).

So what needs to happen?

The solution is actually quite simple but requires a high level of consistency. What we need to do is to bundle the episodes using their original series and episode numbers. For example (from The Two Doctors);

You can see we have Episode number 1 (called "Episode 1"). If you go to the epguides.com page for Doctor Who you'll see that the Two Doctors falls in Season 22 of the Classic series and that the three episodes in question are actually Episodes 7, 8 and 9 of that series.

And here's another example from The Green Death; 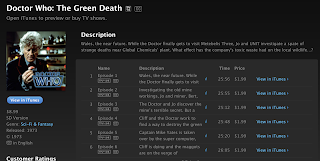 If you purchase both of these as they are you'll get two episode 1's, two episode 2's, etc. However, if the iTunes purchases had the correct number and season then you could merge purchases into your episode list (under "Doctor Who: The Classic Series"), and they wouldn't overlap.

Makes sense to me ... I contacted the BBC via their website (email address: WW.Comments@bbc.com), and my comments were passed on to the relevant department within BBC Worldwide who are responsible for the commercial exploitation of BBC properties (including Doctor Who).

Hopefully, they'll sort this issue out!
Posted by Andy Pellew at 8:15 AM